Guardianship vs. Custody - What’s the Difference?

What’s the difference between guardianship and custody and which is the better option for you? Read and find out more from Trust & Will today!

Head of Legal, Trust & Will

While similar in concept, there’s actually a clear legal difference between guardianship versus custody. Both terms are used to describe a legal relationship between an adult and a child. And both are determined by a court. But, they are not interchangeable ideas. The main difference between guardianship and custody has to do with parentage and the extent of responsibility and authority an adult has over the minor in question. 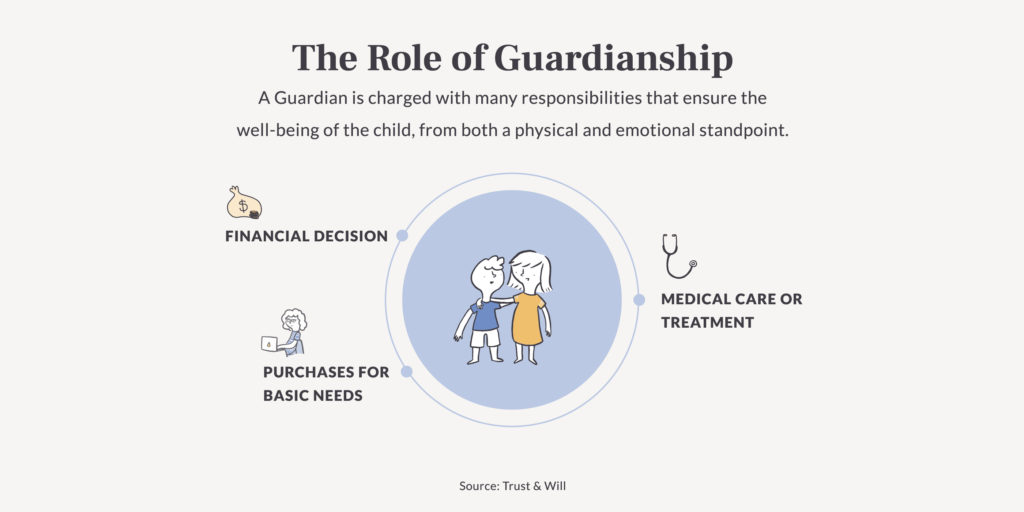 Legal custody is what a court would grant if there’s ever a dispute regarding where a child should live. For example, in cases of divorce or separation, a custody agreement could determine things such as which house a child will live in and how much of their time will be spent there. Terms of a custody agreement can also define other aspects of care, such as medical and education expenses and other financial obligations as well as shared living arrangements.

Legal guardianship is what a court may grant someone other than a biological parent. It would give an adult the right to care for a minor. Parents assume guardianship by default, but in cases where a parent is absent or unfit, the court may step in and appoint someone else to the role. Depending on circumstances, biological parents may retain their parental rights even if someone else is appointed as guardian. But a judge can revoke or suspend these rights in extreme cases. In the event biological parents are deceased, a guardian could also be granted custody.  Read our full guide to guardianship here.

What Decision-Making Power Do Custodians and Guardians Have?

As a custodian or guardian, your job is to make decisions about the well-being of a minor. The extent to which you have decision-making power can differ when it comes to custody vs guardianship.

Legal custody means you have the authority to make all decisions about a child’s welfare. This can include decisions about education and financial matters, medical care, food, housing and other basic needs and legal rights.

If you have guardianship, you have the power to act for the benefit of a minor (also referred to as “the ward”). Guardianship can be somewhat limited in terms of “big decisions.” Generally, a guardian will make the “day-to-day” decisions regarding care and welfare.

Who Appoints a Custodian or a Guardian?

You can nominate a guardian for your children as part of your Estate Plan. Doing so means that in the event you are unable to care for your child, a judge will review your nomination and appoint guardianship. Most often, courts will uphold the wishes of a parent, but there are instances where a court may override a parent’s choice and appoint someone else to care for the child.

How Long Does a Guardianship Last?

If biological parents are still alive, guardianship is often temporary. But if parents have passed away, a court can grant permanent guardianship over a ward. In this case, guardianship generally lasts until a minor is 18 years old.

There are a few reasons guardianship could end prior to an 18th birthday. This could include joining the military, marriage, entering a registered partnership, a guardian no longer being willing or able to carry out his or her duties, etc.

Can You Be a Guardian Of an Adult?

Guardianship of an adult (known as a “ward”) may be appointed in cases where the adult is not able to care for him or herself due to incapacitation or a disability.

Are There Requirements to Be a Guardian?

There are several requirements for guardians. Most are common sense, such as:

Who Appoints a Custodian or a Guardian?

While you can make your wishes known about who you want to raise your child if you’re no longer able to do so, ultimately it’s a judge who must formally appoint a custodian or guardian based on the best interest of the child. Appointing a guardian is an important part of your Estate Planning process. In the event you pass away or are incapacitated, if you’ve nominated a guardian to step in, it means you can feel confident your child will be taken care of the way you envision.

What’s the Difference Between Physical and Legal Child Custody?

We often speak of “custody” in general terms, but there are actually two types – physical and legal.

Physical custody means you have physical control of a minor during a defined time period. For example, with divorced parents, one parent may have visitation rights that gives them physical custody during their time with a child, but they may not have primary custody of a child.

Legal custody means you have all authority regarding all decisions for the child.

Nobody wants to think about the unimaginable: not being able to care for or raise your child yourself. But the reality is, not making these tough decisions now could mean dire consequences in the future. Trust & Will makes it easy, simple and affordable to ensure you have a say about who should step in at the most important, difficult time in your child’s life.

Learn more about how to nominate a guardian for your children today. It only takes a few minutes, but the peace of mind lasts a lifetime. Get started today!